Top 10 most Sustainable Office Buildings in the World


Nowadays, sustainable architecture has become very common, and the newly developed technologies to enhance it are in continuous and rapid development. Credible certification systems like LEED and BREEAM are raising the bar and setting goals for innovative designers. Here is a list of 10 of the world’s most sustainable office buildings and a brief on the techniques they have adopted to enhance performance, reduce energy consumption, and provide a healthy working environment.

1. The Edge – Amsterdam, Netherlands
Deloitte's new corporate headquarters, named The Edge, is designed by London-based PLP Architecture and is located in Amsterdam, the Netherlands. This 40,000 square meter grade A office building by employing innovative smart technology, has achieved a landmark in the world of sustainable building by scoring the highest BREEAM rating ever, a score of 98.36%. The work space is organized around a grand 15-storey atrium, a window animated by office activity, circulation bridges and lift cores. The base of the atrium is activated by a restaurant, a café, exhibition spaces and conference facilities. The atrium is the lung of the building, ventilating the office space. The shape of the building allows north light into 60% of the offices. 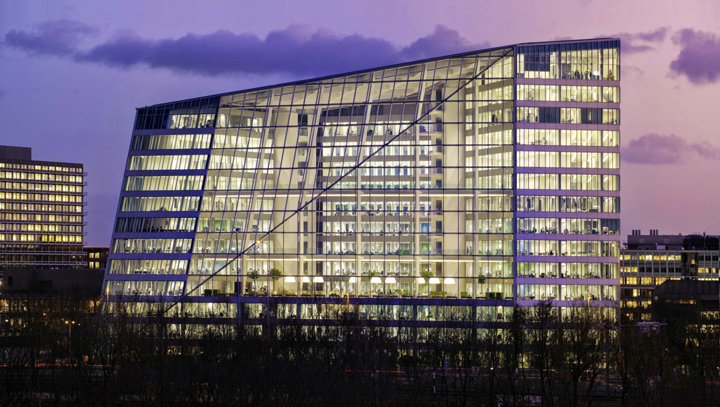 2. Bullitt Center – Seattle, USA
The 6-storey commercial office building was designed by Miller Hull Partnership for the Bullitt foundation to be certified as a “Living Building”. It was provided with a rainwater harvesting system, which is capable of collecting and filtering 56,000 gallons of water. It also has five aerobic composters, which treat human waste efficiently, without releasing an unpleasant odor. The building’s rooftop, additionally, carries photovoltaic cells, which generate 230,000 kilowatt-hours a year, which is the right amount to operate the building. 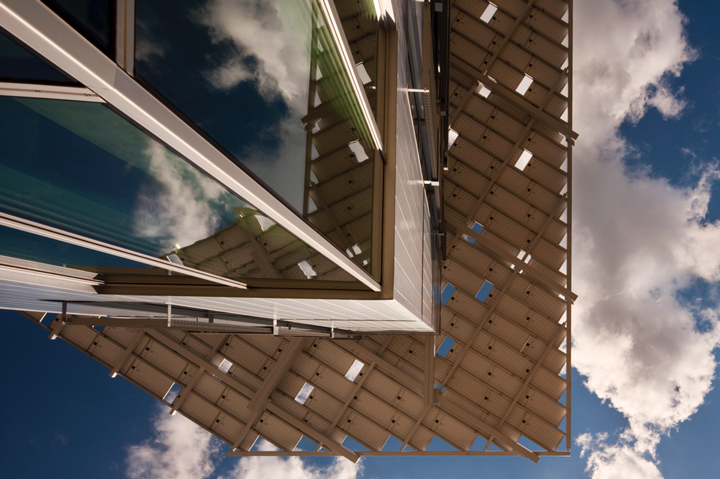 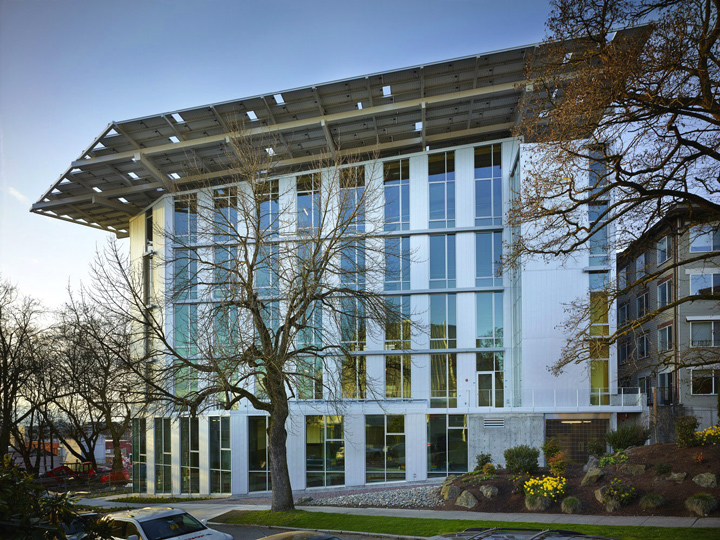 3. RB12 – Rio de Janeiro, Brazil
The Sao Paolo / Paris-based Triptyque designed the RB12 commercial building to reanimate downtown Rio. The building produces its own needs of electricity via photovoltaic cells. It has a bioclimatic façade with windows, which automatically control light intake, allowing for optimized daylight entry, and it carries gardens on its terraces, which contribute to the cooling of the interior spaces. 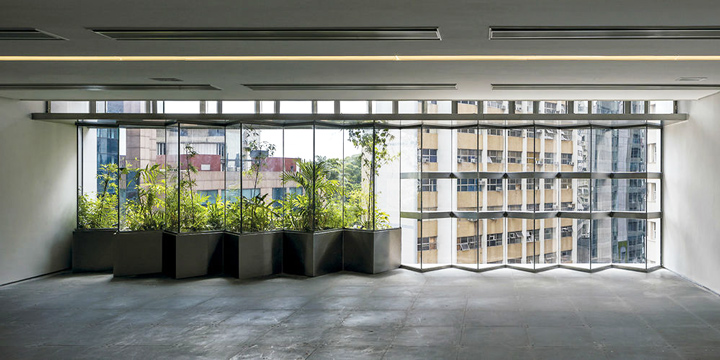 4. Pixel – Melbourne, Australia
Studio 505 was assigned by Grocon Construction and Development Company to design a 6 Star Greenstar Carbon Neutral Development and Sales office building. The relatively small building integrates multiple environmental systems to enhance the overall building performance. The systems include an extensive green roof and a rainwater collection system which might be capable of making the building self-sustainable for water supply. It also features a quite remarkable façade which combines playfulness with functionality. It is composed of fixed shading louvers, double-glazed curtain wall, and solar panel shades. Pixel has managed to achieve a perfect 100 score under the Green Star rating system as well as a LEED platinum certificate. 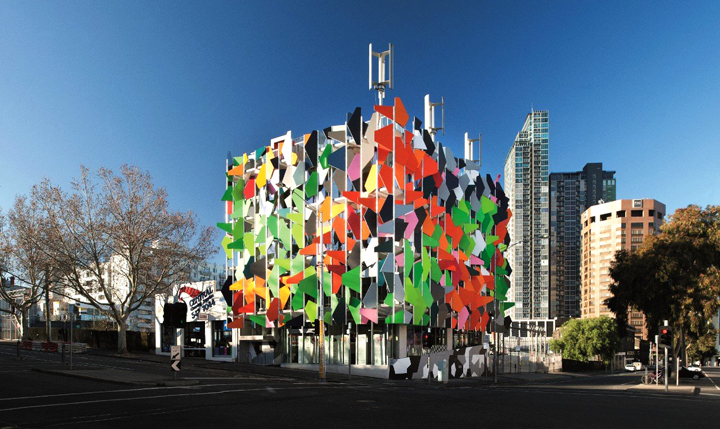 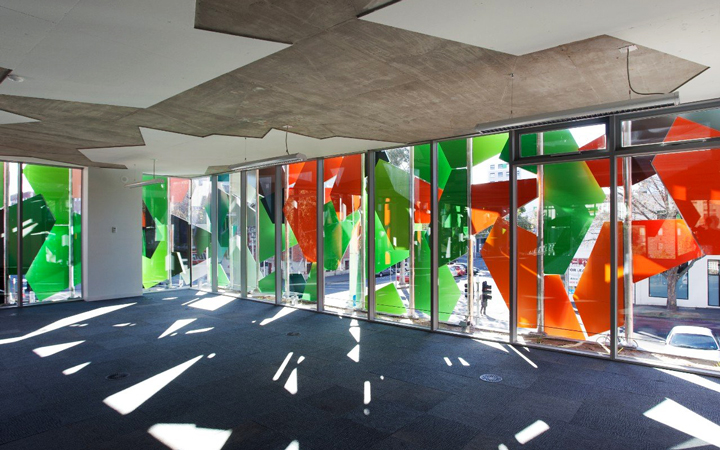 5.1 Angel Square – Manchester, United Kingdom
This office building, designed by 3DReid, has the highest BREEAM rating in the United Kingdom, with 50% reduction in energy consumption and 80% reduction in carbon emission, compared to the city’s other commercial buildings. It is enveloped in a double-skinned façade and high thermal mass concrete to control the heating and cooling of the building. It, also, has an aerodynamic system which employs the atrium’s natural stack effect to elevate waste air and pass it through heat exchangers to warm it and reuse it. The building is, additionally, provided with rainwater harvesting system to lower water consumption, and it uses rapeseed from local farms to produce fuel for building operation. Moreover, the designers have prepared the building for possible future climatic changes, based on the predicted weather data for 2050. They have accounted, in their design for a possible rise in average temperature by 3 – 5 degrees during summer and increased rainfall by 30% during winter. 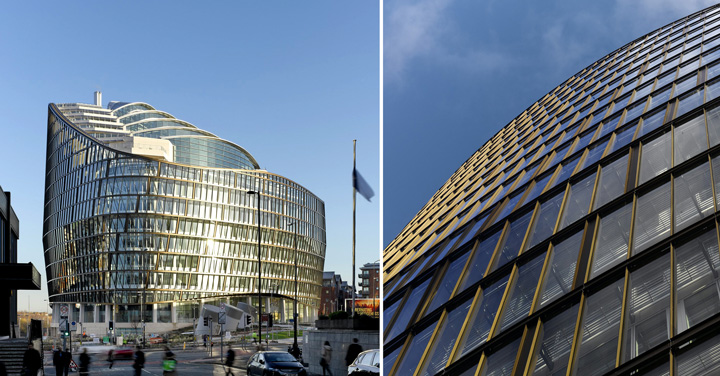 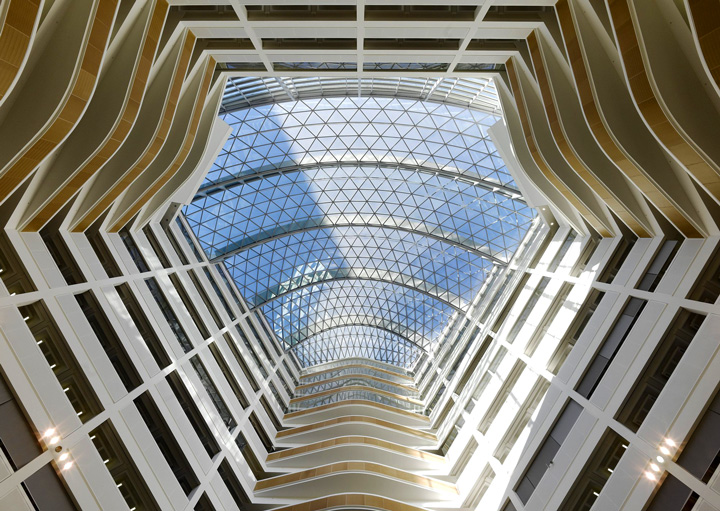 6. CH2 Melbourne City Council House 2 – Melbourne, Australia
The commercial office building was designed by DesingInc. To promote the interaction between city and nature. Its façade is designed to control the indoor climate and its concrete structure minimizes variance in temperature. The building is 100% naturally ventilated via tapered ventilation ducts. The air is changed every half an hour, providing a continuous supply of fresh air. Accordingly, the building managed to satisfy and exceed the 6-star energy rating system in Australia. 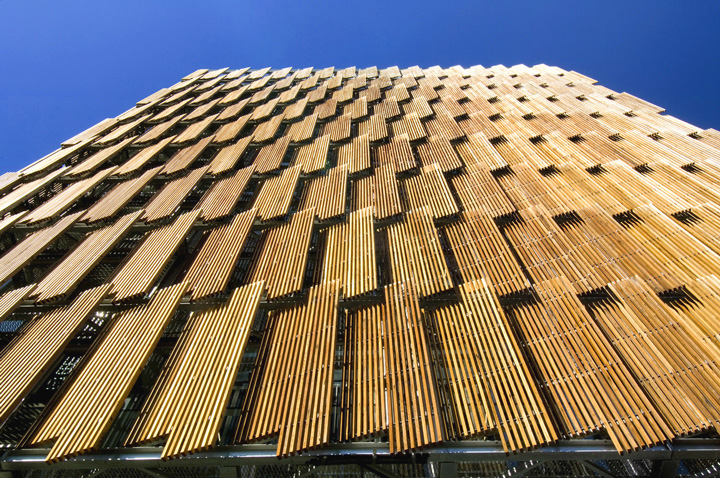 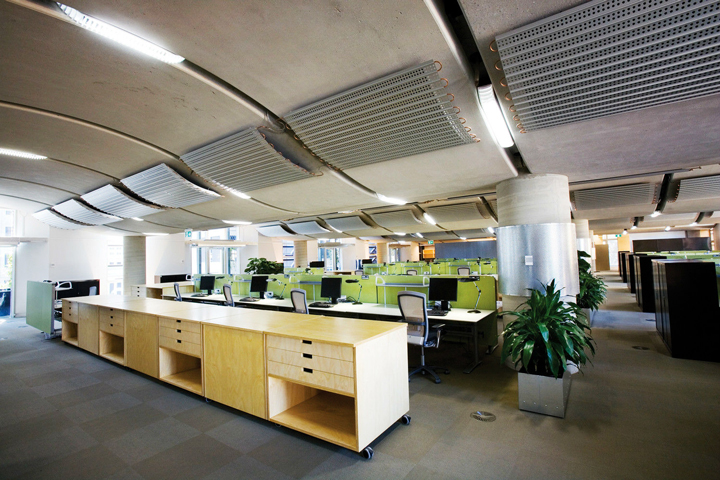 7. Federal Center South Building 1202 – Seattle, USA
The building is a renovated warehouse turned into the northwest regional headquarters for the U.S. Army Corps of Engineers. The collaborative workplace environment is not the only prominent feature of the building which was re-designed with cost-effectivity and sustainability in mind. It re-uses timber from the non-historical 1202 warehouse and employs active and passive systems to save energy. It is protected from the sun via horizontal shades, vertical blades, and internal window coverings. Natural ventilation and daylighting are sufficiently supplied to the building’s interior, which is also provided with rainwater harvesting and natural drainage system. The building has managed to achieve a Gold LEED certificate, and it is currently one point below platinum. 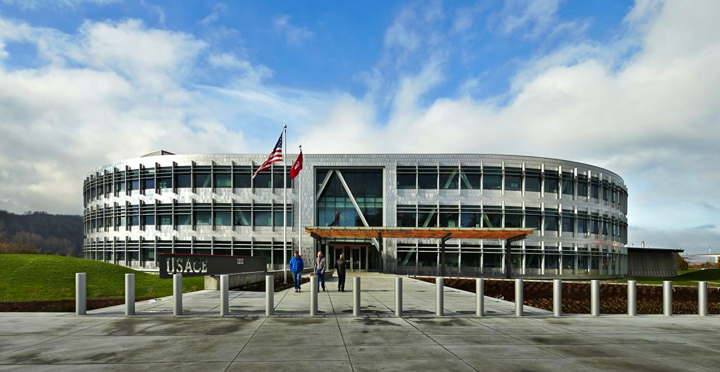 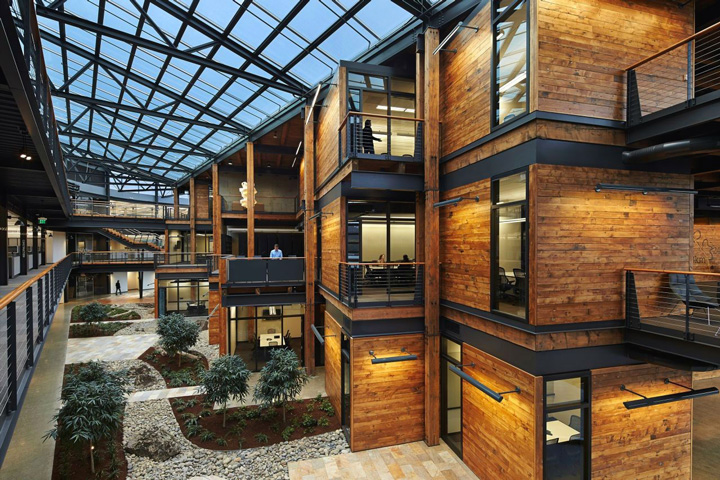 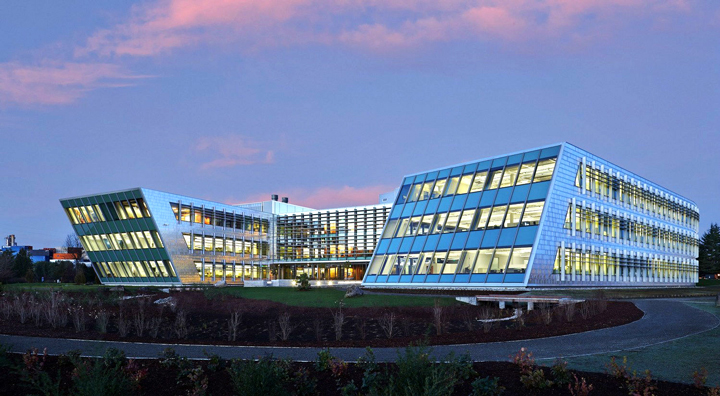 8. Genzyme Center – Massachusetts, USA
The office building, designed by Behnisch & Partner, is headquarters to a number of biotech companies. Its outstanding feature is its 12-storey-high atrium which provides natural light to 75% of the building and refreshes the indoor air via stack effect. Numerous Hanging mirror panels reflect the light coming through the atrium to ensure its distribution throughout most of the building. A concrete structure is used for the building because of its various applications and high thermal mass, and the building’s green roof collects rainwater for evaporative cooling towers. Genzyme center was capable of achieving the LEED Platinum certificate for Building Design and Construction. 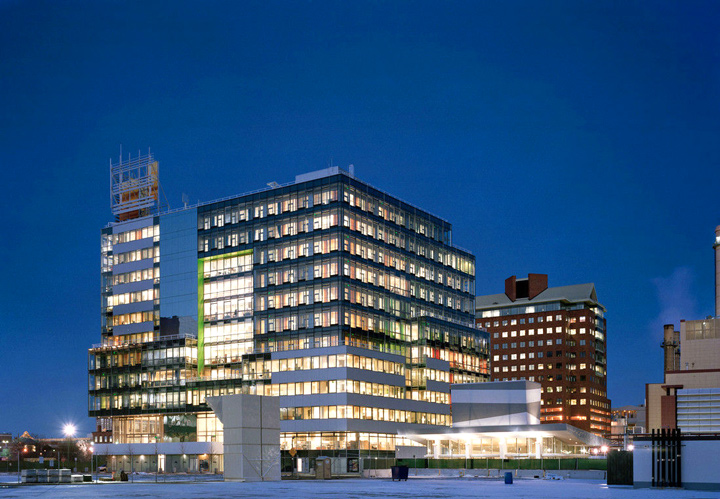 9. One Embankment Place – London, United Kingdom
The world’s second highest BREEAM-rated building, in London, operates on biofuel sourced from locally collected and refined waste vegetable oil. It features green walls and gardens and saves water by using low-flush toilets. It is, also, provided with sufficient staircases in the atria to be used instead of lifts for energy saving. The 25-year-old building was refitted by London-based TP Bennett, and it had the highest BREEAM rating of 96.31% before it was surpassed by The Edge in 2016 which could get a rating of 98.36%. 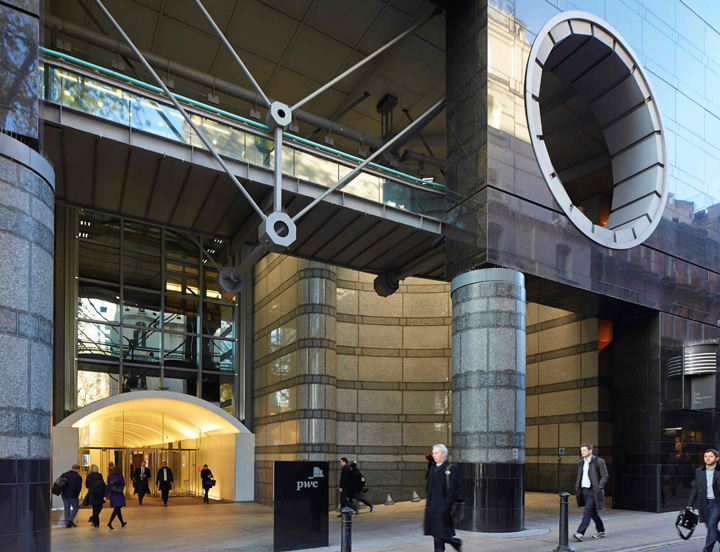 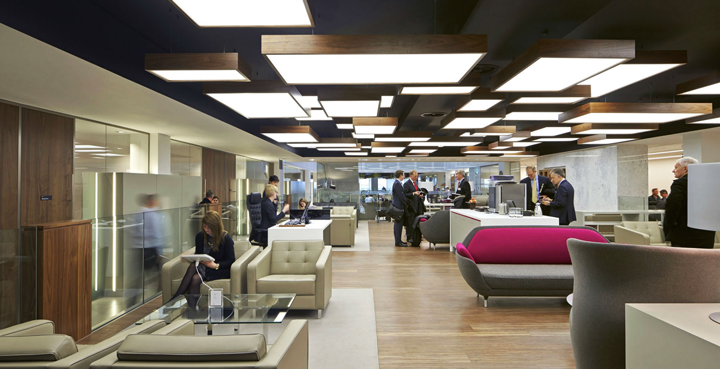 10. Powerhouse Kjørbo – Bærum, Norway
The two office buildings from the 80s were renovated by Oslo-based Snøhetta. They were planned to generate energy more than they consume, by integrating and adapting systems from 100 selected projects worldwide. They were outfitted with solar panels which are capable of producing 41kWh/m2 each year, and they were also provided with natural ventilation, insulation, and energy efficient lighting. Following the renovation works, the energy used by both buildings was reduced by 90%., which gained them an “outstanding” rating by BREEAM-NOR. 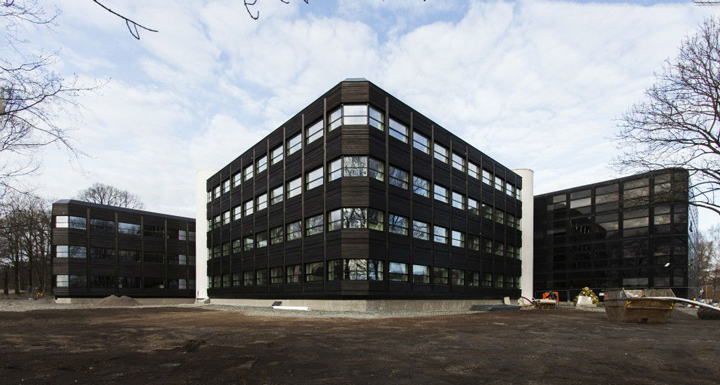