10 of the Most Beautiful Metro Stations around the World


In order to add a touch of creativity to the public transit system, cities across the globe are turning insipid stations into immersive experiences. Here, we take a tour of the world’s most beautiful underground stations, featuring stops that sparkle with mosaics, showcase hand-painted platforms, and even transport passengers to the pages of a Jules Verne novel.

The Westfreidhof station in Munich, features unpaved walls reminiscent of those in a cave. Inaugurated in 1998, the station is illuminated by eleven lamps with a diameter of 3.80 meters, which section the platform in different colors, spreading blue, red, and yellow light throughout the spaces. 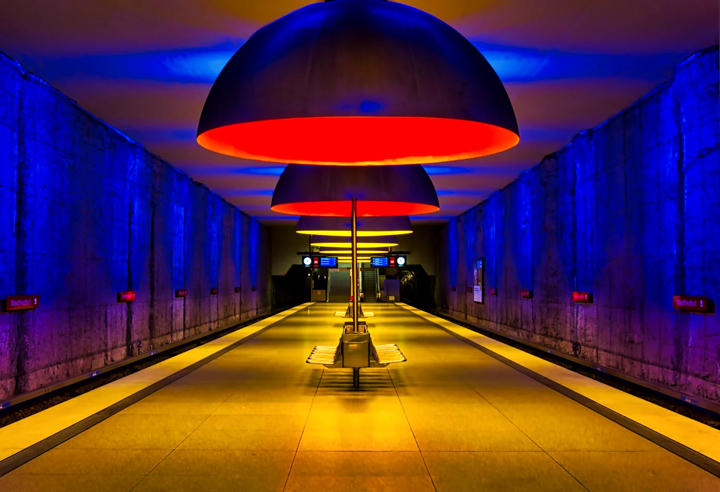 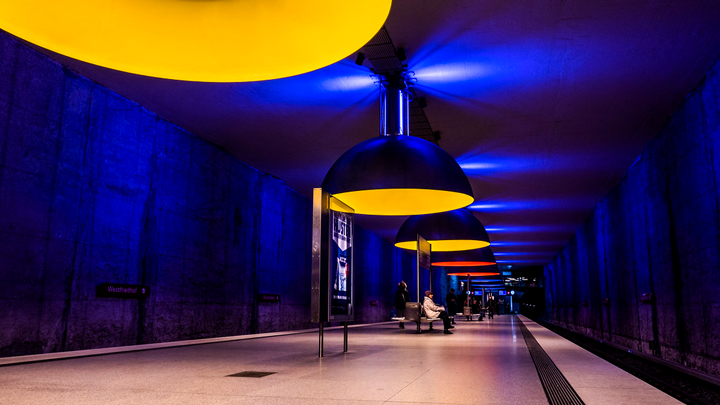 Russian architecture is known for its opulence, and the Komsomolskaya Station in Moscow is no exception. Designed in the Baroque style by renowned architect Alexey Shchusev, this hub features a yellow, barrel-vaulted ceiling decorated with ornate friezes and supported by 68 columns faced with white marble. 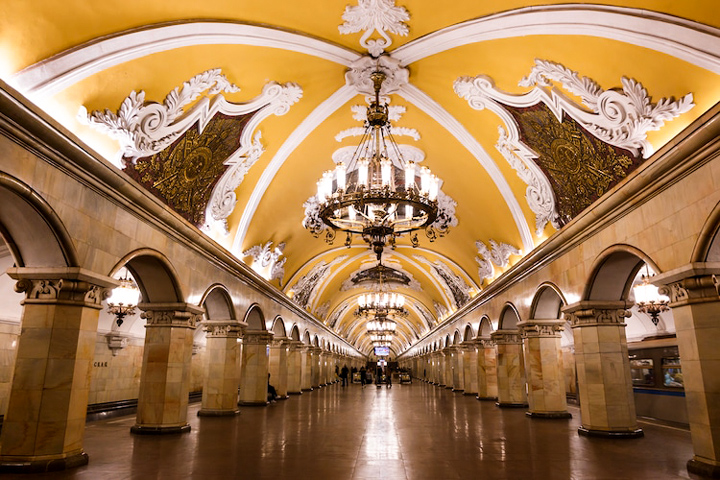 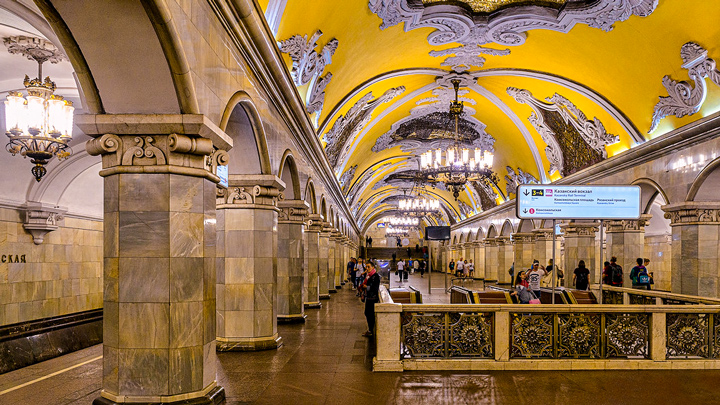 Located in a famous district of Kaohsiung, Taiwan, the luminous “Dome of Light” in the Formosa Boulevard was designed by an Italian artist. Comprising 4,500 glass panels and measuring 30 meter in diameter, this dome is currently the largest glasswork in the world. In addition to its stunning size, the installation is celebrated for its thought-provoking symbolism. 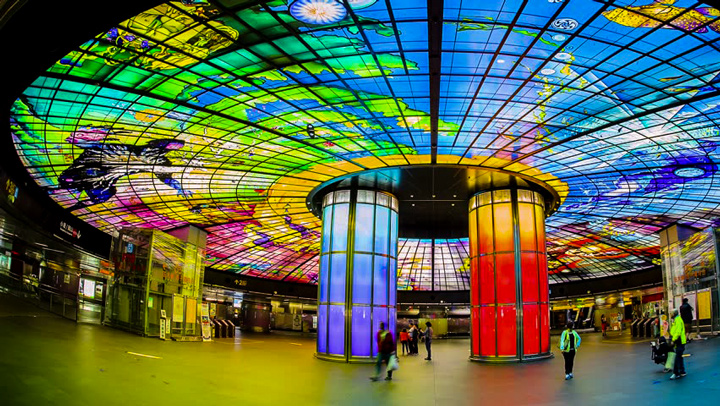 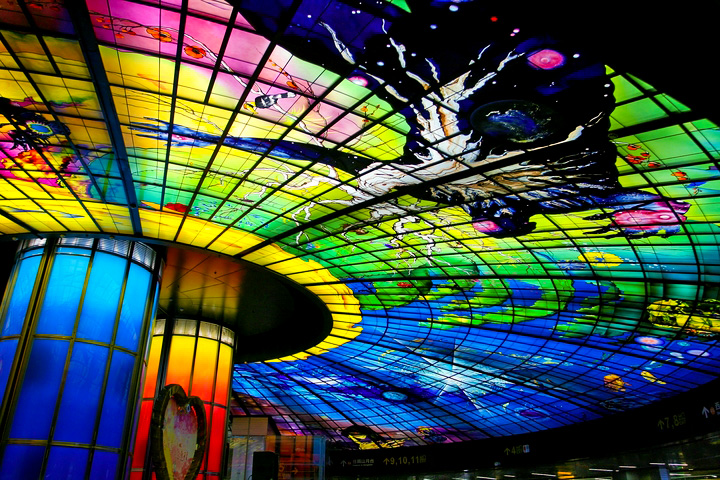 Solna Centrum Station opened in 1975 and features a bright red cavernous ceiling. The walls of the station portray a kilometer-long forest. The sprawling station is also a shopping mall housing nearly 120 shops and restaurants, 40 offices and 214 apartments. 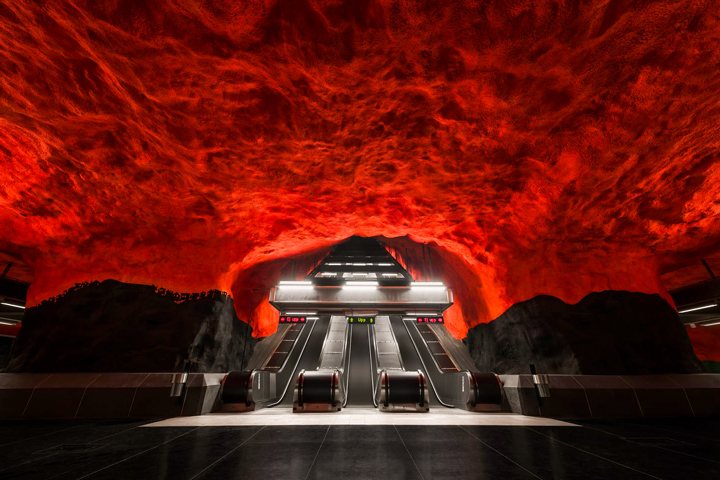 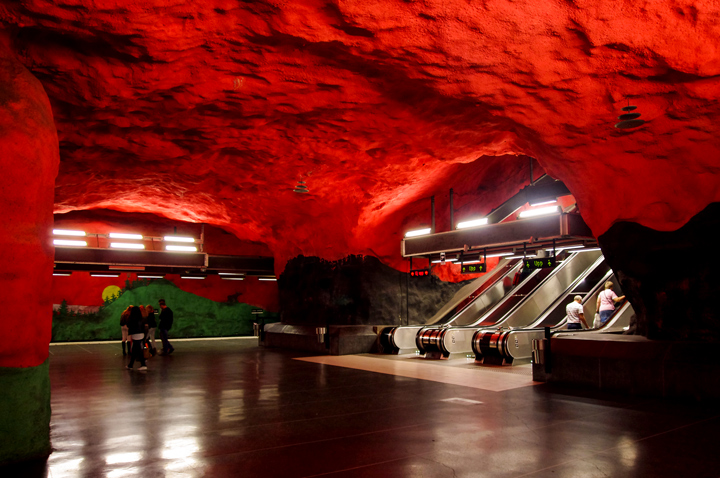 Tashkent, the capital of Uzbekistan, has some wonderfully ornate metro stations, including this main one. Alisher Navoi Station was built in 1977 but a total ban on photos was only lifted in 2018, and only since then it has been visible to the rest of the world. Central Asia’s oldest subway is a masterpiece of decorated platforms, glazed columns, and shimmering tunnels, capable of surprising even the most jaded visitors. 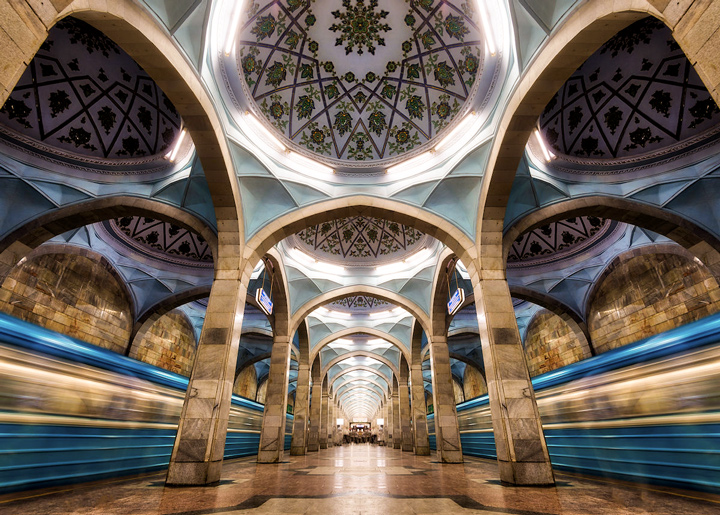 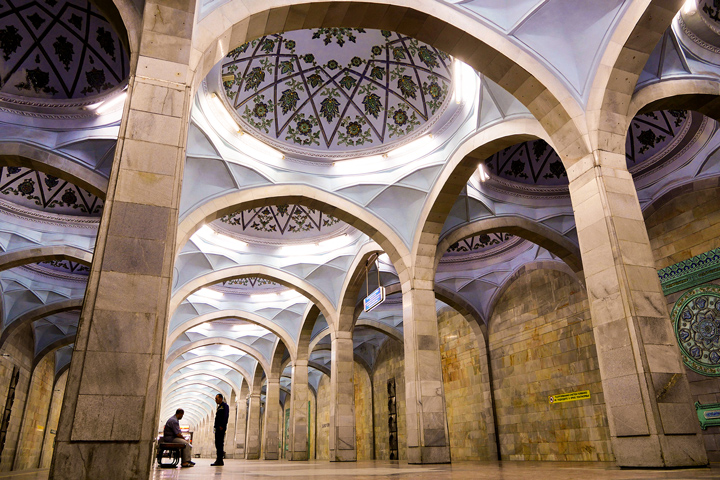 Tucked beneath Paris’ Musée des arts ET métiers—a museum dedicated to France’s technological advancements and industrial design—is the Arts ET métiers metro station. Inspired by the overhead institution and intentionally reminiscent of a Jules Verne novel, this stop showcases a steampunk aesthetic. This station is lined with shiny sheets of copper dotted with porthole-shaped windows. There is also a panel of gears, pulleys, and cogs on the vaulted ceiling, floating just above the train tracks. 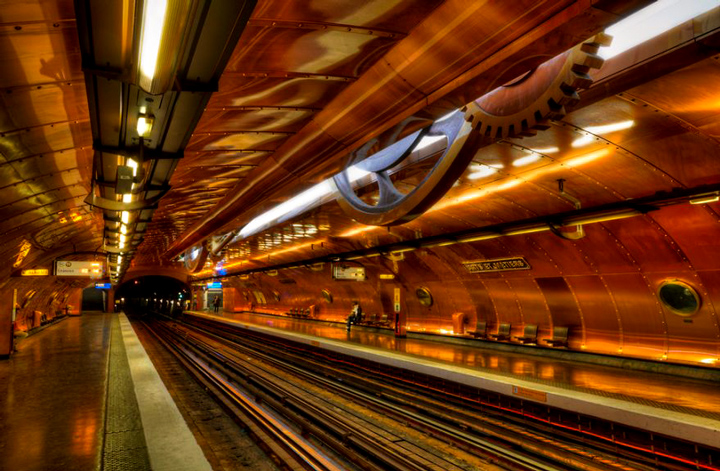 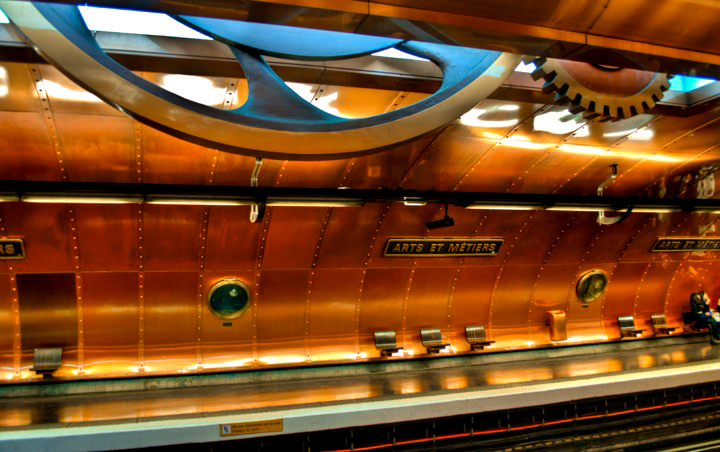 London’s Canary Wharf station was completed in 1999 and won several architecture awards. Ascending the massive escalators of this station feels like entering an intergalactic world. The beautifully designed glass ceiling has a way of making the passengers feel like they are in a spaceship. 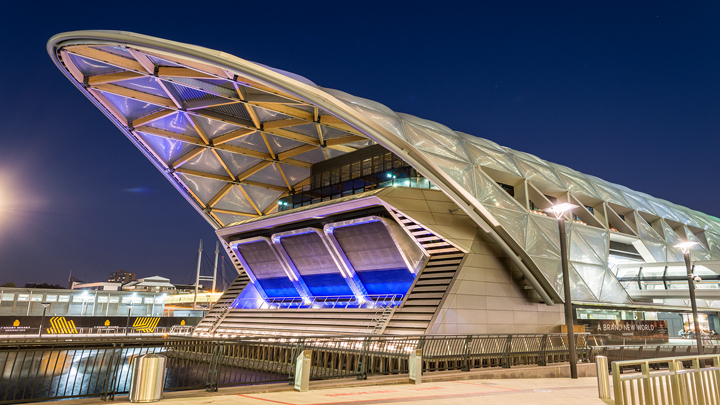 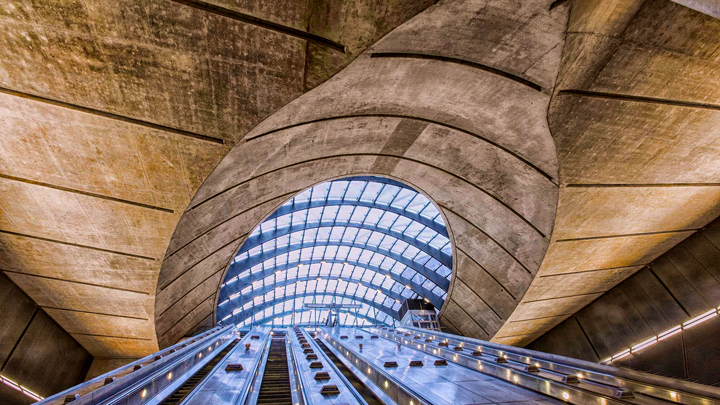 Stockholm’s T-Centralen Station is the main hub of the city’s underground system. Featuring cave-like walls decorated with hand-painted floral motifs, this stop is one of nearly 100 bustling Stockholm stations adorned with eye-catching art. Thinking strategically without sacrificing aesthetics, the artist opted to render his designs in a beautiful shade of blue in order to offer commuters a sense of calm as they rush to and from their trains. 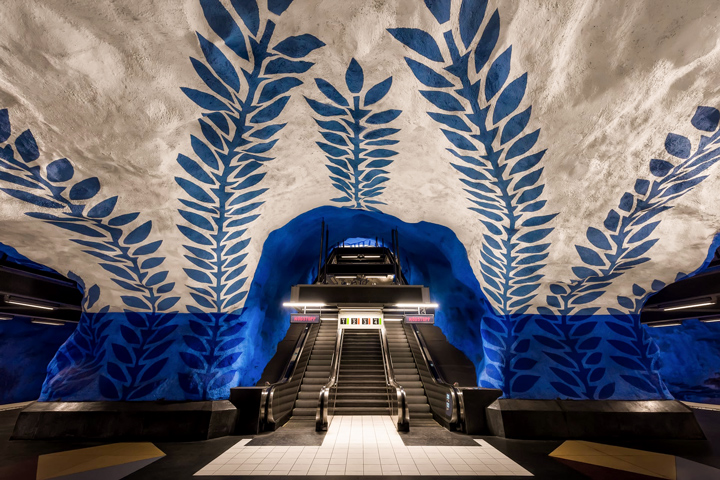 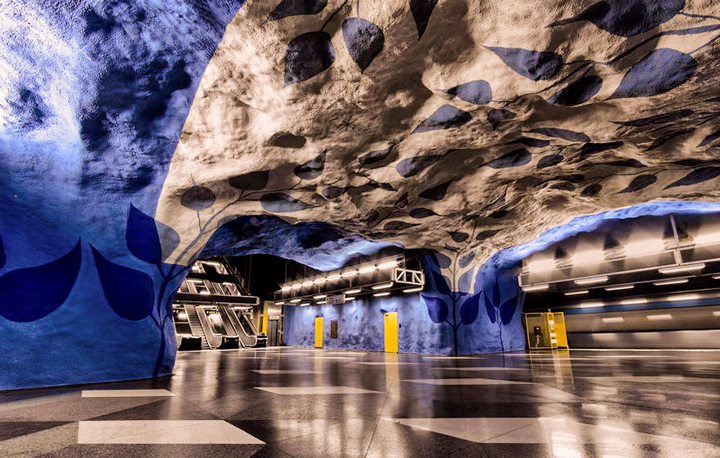 In 2012, the Toledo Metro Station in Naples, Italy, made its spectacular debut. Designed by a Spanish architectural firm, this amazing metro station blurs the line between arts and crafts and architecture. This water-and-light themed stop is celebrated for its beautiful blue and white mosaics, which turn an escalator ride into an ethereal experience. 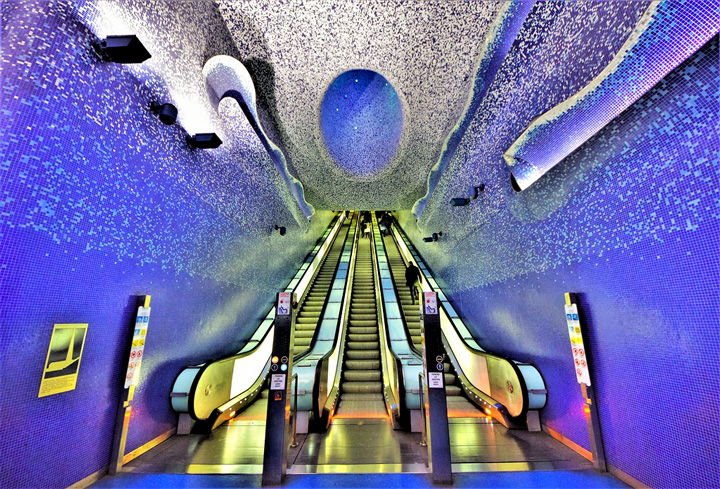 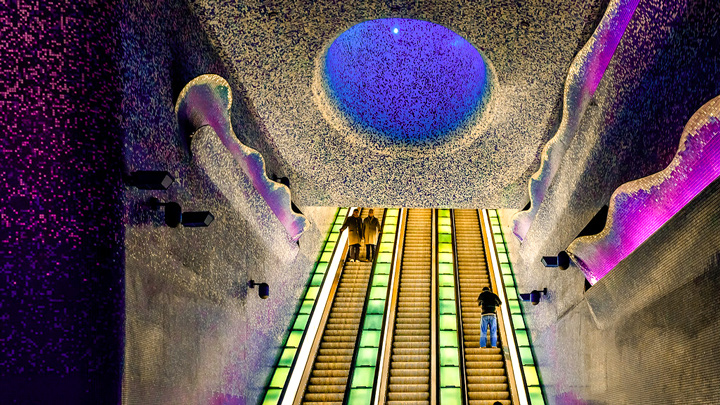 Like several metro systems around the world, there is a strong focus on artworks and architecture at many of the Lisbon Metro stations. Olaias is just the one that arguably makes the greatest impact on the travelers with its numerous art installations. If you were trapped inside a giant kaleidoscope, then it would be just like being at Olaias Station. The huge, multi-level concourse is decorated with an abundance of glass panels, of many different colors. They are lit from behind so that they glow, bathing passengers in different colored light creating a beautiful picture. 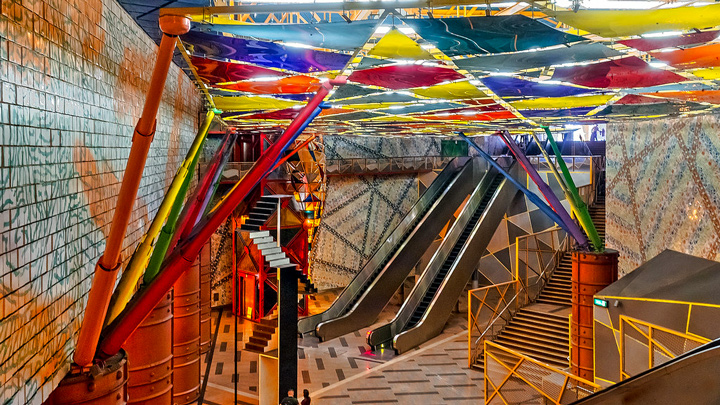 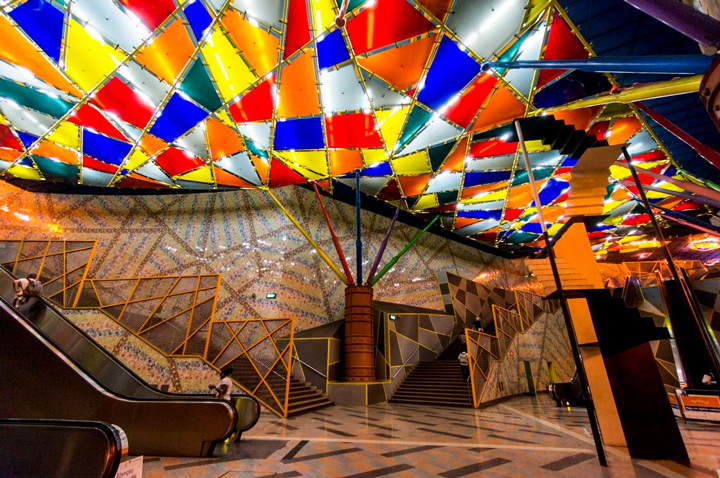